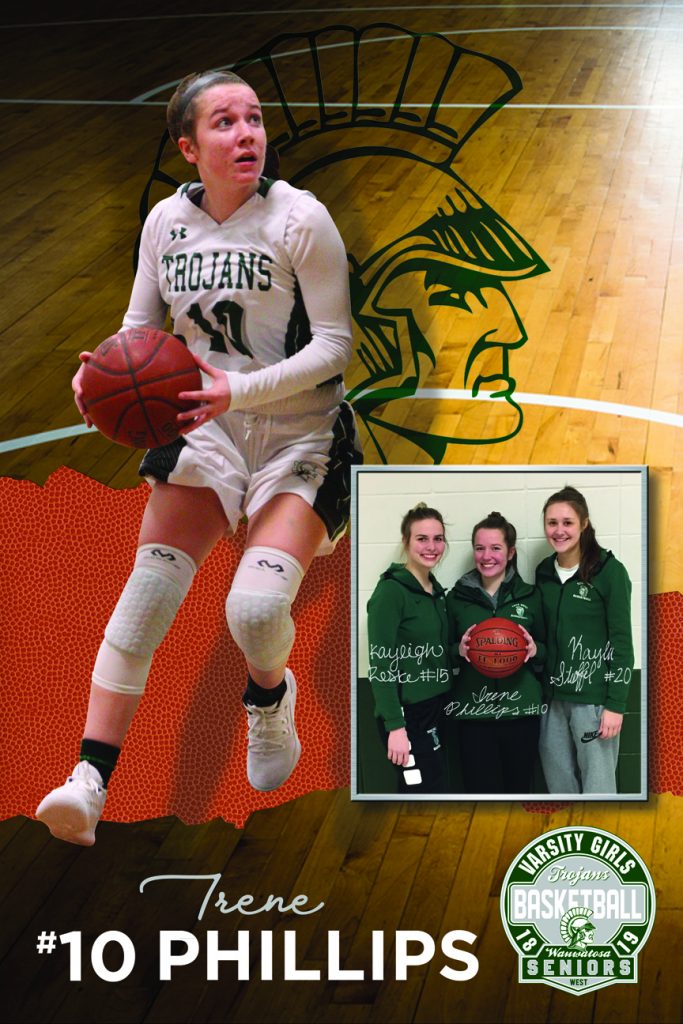 Irene is one of the most well rounded people you will ever meet. She’s good at everything. Obviously, she’s a pretty good basketball player.  She’s been a 3 year varsity player. She’s fast, can drive to the basket and finish, can dribble, and can shoot from the outside. She broke the school record this year by scoring 32 points against Brookfield East. Last year she received honorable mention and this year I think she has a great chance to exceed that. She’s also a 4 year varsity soccer player and has been honorable mention for that as well. However, she’s not just good in sports.  Her real passion is theatre. She has been apart of every school play and musical all 4 years of high school. Her sophomore year she was the lead in both of the school plays and this year she was the lead in Mamma Mia. While she doesn’t know exactly where she will go to college yet, but she will be majoring in theatre. In addition to sports and theatre, she’s also been a part of NHS, spanish NHS, locks of love, the writing center, and journalism.  She wants to be a part of everything. When I asked for volunteers to work the youth basketball games, Irene was the first person to volunteer. Shortly after she volunteered, she said she couldn’t do it because she had a singing audition for a scholarship, however, it just goes to show she stretches herself in so many different directions. It’s incredible that she still finds time to study, but clearly she does as she has a 3.976 GPA. Obviously, it will be extremely hard to replace Irene on the court next year.  But it will also be hard to replace her leadership. During practice, often times whichever team loses the drill has to run. Irene is the only player that runs each and every time, no matter whether her team wins or loses. As a coach, I know that those kinds of players are hard to come by and I am very proud of her for being that type of player and person. I hope that her leadership the way she conducts herself has rubbed off on some of our younger players. Irene, wherever the future takes you, I know you will find a way to be successful because it’s all you know how to do. 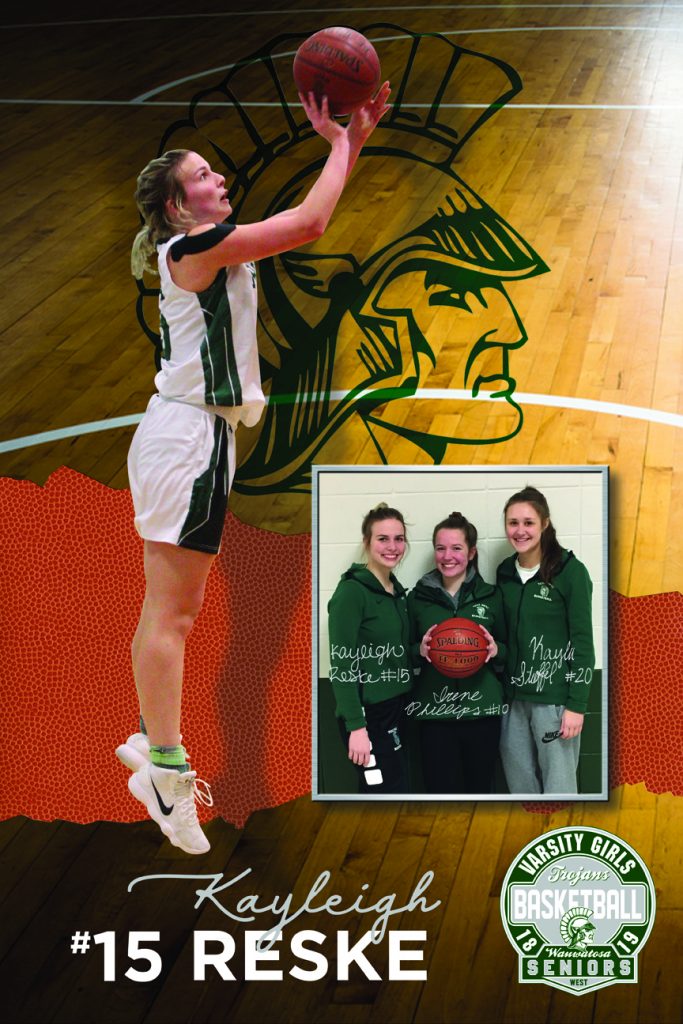 It’s been great to get to coach Kayleigh for the last two years.  For those of you who don’t know Kayleigh that well, let me tell you that she likes to talk, so much so that sometimes she reveals a little too much information. Also, if there’s singing on the bus, you can bet that Kayleigh’s voice will be louder than anyone’s.  One of the things I like best about Kayleigh are her positive attitude and carefree demeanor. If you picture Kayleigh in your head, it’s hard not see her either smiling or laughing. However, I do have a story of one time when she wasn’t smiling or laughing. Last year while we were shooting free throws one day, Kayleigh started crying out of nowhere. This struck me as odd and so I asked her what was wrong.  It turns out, Kayleigh started crying because she knew that next year Emily Wagy would no longer be the team and the thought of that was just too much to take. The good news is, she seems to have handled it well. I’m extremely proud of Kayleigh for her basketball career. While last year I know she didn’t get as much playing time as she wanted, she was still a very vocal leader on the bench and embraced that role.  This year, I was happy that she could expand her role to the court more and still be that same leader. I will never forget when Kayleigh scored 14 points in 2 and a half minutes against DSHA this year. It was truly incredible to watch. She is a 3 year varsity basketball player and an honorable mention lacrosse player. She has a 3.528 GPA and will be attending UW-La Crosse next year where she will be reunited with Emily Wagy. She plans to do the pre-dental program and eventually go to dental school.  She’s also very involved in other ways at Tosa West as she has been apart of National Honor Society, Key Club, best buddies, link crew, Chick-Fil-a club, and sports leadership club. She will be sorely missed next year but it isn’t hard to see that the future is bright for Kayleigh. 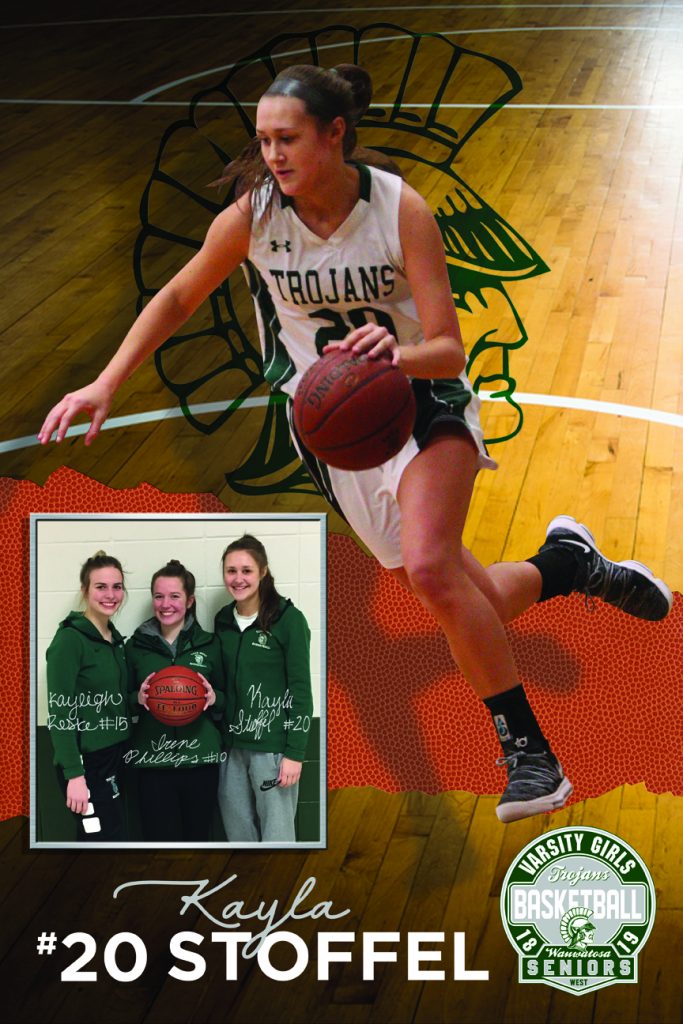 If I had to describe Kayla in one word, the word would be “chill”. She’s the most relaxed easy going person there is. I don’t think I could upset her even if I tried. Some players get mad when they don’t start, or don’t score, or don’t play as many minutes as they want to.  Whether she starts or not, scores or not, plays a lot or not, you will never hear a peep out of Kayla. She’s one of the most unselfish players I have had the opportunity to coach. In fact, in practice and games we harp on Kayla to shoot the ball more, usually to no avail. She’s too busy passing to someone else so they can shoot. I guess the only way we can get her to shoot is if there literally isn’t enough time for her to pass the ball. Yes, I am referring to the shot against Nicolet earlier this season. Down by 1 with 1.1 seconds left Janessa, inbounded the ball to Kayla who caught the ball about 5 feet behind the arc and hoisted her trademark ceiling scraper shot and buried it. It is a shot I will never forget and could watch on replay 100 times over. Knowing Kayla, she probably gives all the credit to Janessa for the pass and didn’t take any credit herself.  She puts the team first at all times and as a coach you love having a player like that. She’s an extremely intelligent basketball player who understands the game and is deceptively quick and athletic. This athleticism has helped her be 3 year varsity basketball player, but also a 4 year varsity soccer player where she won honorable mention last season. Kayla has a 3.907 GPA and will attending either UW-Madison, or the University of Minnesota and majoring in business. Kayla, if you need any advice on that decision, a Badger would destroy a Gopher 10 times out of 10. Like the other 2 seniors, Kayla has been very active at Tosa West, being a part of National Honor Society, Spanish National Honor Society, Key Club, Link Crew, Mu Alpha Theta, and Chick-Fil-A leadership academy. Kayla, this team will not be the same without you next year, and given your 3.907 GPA, I know you’ll make the right college choice.