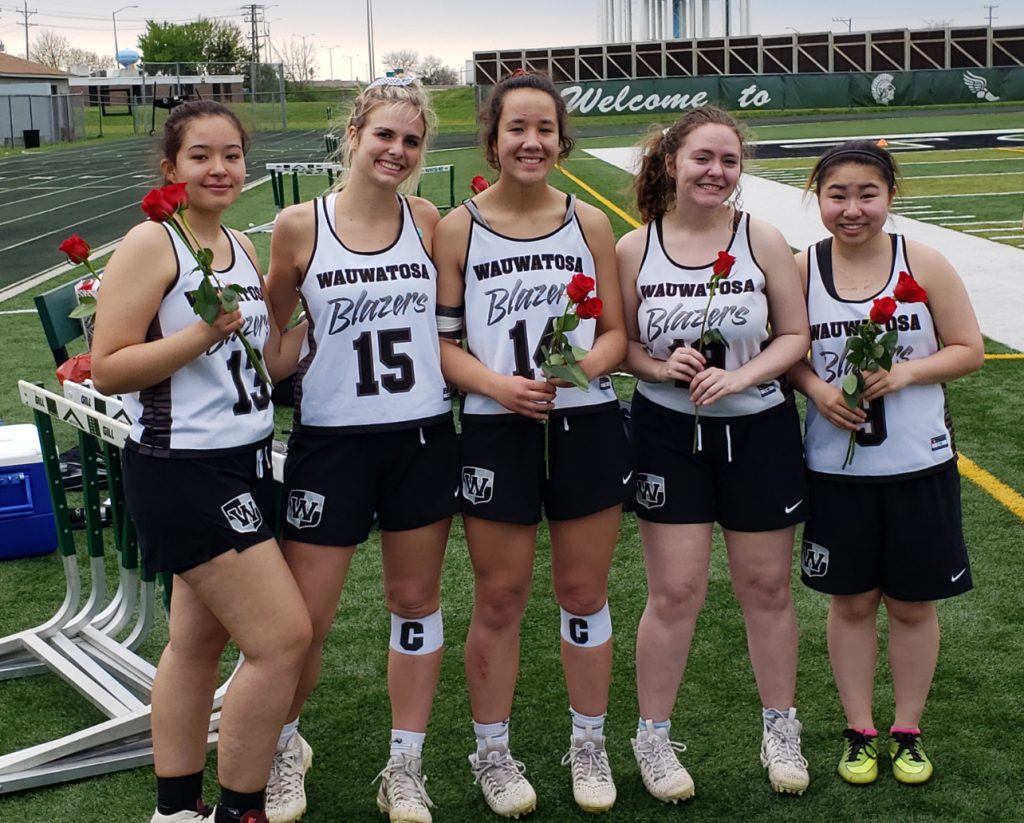 Jess is a Senior at Wauwatosa East and has played for the Wauwatosa Lacrosse team for 2 years and is the daughter of Gwen Yee. Her favorite class is Media Communications. Outside of lacrosse and high school she plays piano and works at Bubble Waffle. After High School Jess plans on going to UW Milwaukee and is undecided on her major. Her favorite memories on the team are all the team bonding we have done over the seasons.

Sammi is a Senior at West and has played for the Wauwatosa Lacrosse team for 2 years and is the daughter of Lisa Kennedy. Sammi previously played for the Brookfield Lacrosse team before Wauwatosa had a lacrosse team. Her favorite classes in High School were English and AP Lit. Sammi is a member of the National Honor Society, Spanish National Honor Society, American Civil Liberties Union, Key Club, and Mock Trial. After High School Sammi plans on going to Saint Louis University and majoring in Elementary Education and Spanish.  Sammi’s favorite lacrosse memory was when her friends came to a game. While playing she was busy waving at them when all of a sudden she heard a bunch of yelling and then ended up being knocked down because a ground ball came next to her and everyone else was going for the ball.

Citlali is a Senior at West and has played for the Wauwatosa Lacrosse team for 2 years. Citlali is the daughter of Sandra Cuevas. Her favorite class in High School is Psychology. Citlali is a member of the Hispanic Student Union, Spanish Honor Society, ACLU, Key Club, Theater, and AFS. Citlali has also earned a Breakfast Achievers Award and a Wauwatosa School District Art Award. After High School, Citlali plans on going to UW Milwaukee and majoring in Psychology and minoring in criminal justice and Spanish. Her favorite memory was our first win last year against DSHA and scoring her first goal.

Kayleigh is a Senior at West and has played for the Wauwatosa Lacrosse team and has been a captain for 2 years. Kayleigh previously played for the Brookfield High School girls lacrosse team before Wauwatosa had a program. Kayleigh is the daughter of Gaylyn and Chris. Kayleigh’s favorite class in High School is Adventure Pursuits. Along with lacrosse, Kayleigh plays Basketball and is a member of NHS, Key club, Link Crew, Best Buddies, Sports Leadership Club, and Chick Fil A leader academy. After High School Kayleigh plans on going to UW La Crosse and to follow a pre-dentistry track and go to Dental School. Her favorite memory is joking and pranking Indy.

Dori is a Senior at Tosa West and has played for the Wauwatosa Lacrosse team and has been a captain for 2 years. Dori previously played for the Brookfield Lacrosse High School girls lacrosse team and for the Wauwatosa Boys youth team. Dori is the daughter of Noelle Fredrich and Lloyd McMurphy. Her favorite classes in High School are Science, Government, and Politics. Dori is the co-president of ACLU, a board member for key club, a member of NHS and Spanish NHS, and orchestra. Dori was a part of APPSE and placed in the top 10 in the nation and first in State her junior year. She was also a Varsity lacrosse player at Brookfield her Freshman and Sophomore year. Lacrosse runs in the family for Dori where her sibling played in middle school and high school and was a captain of the boys JV team. After High School Dori is planning on going to the University of Minnesota Twin Cities and majoring in Environmental Science and Policy. Her favorite lacrosse memory is scoring her first goal and making all the boys on the other team really mad.

From all the Wauwatosa Coaches, Players, and fans we will miss having you on our team and we want to thank you for all the hard work and dedication this first group of Seniors has put in to building this team. We wish you all the luck in your future endeavors and we hope that you will come back and visit the team in the future. Thank you Jess, Sammi, Citlali, Kayleigh, and Dori!