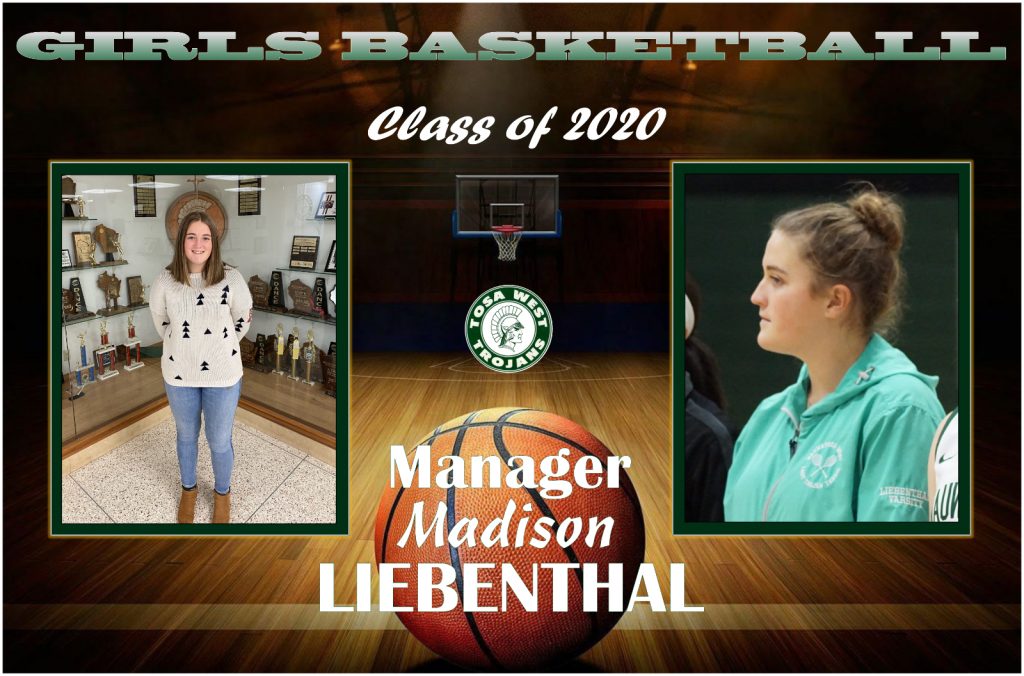 Madison Liebenthal – Madison is one of the kindest and most gracious people you will ever meet. She’s soft spoken but that doesn’t mean she hasn’t been a huge part of our team over the past couple of years. Last year, Madison was on the team and didn’t get a lot of playing time. This year she decided she wanted to still be a part of the team in a manager’s role which has been a blessing. Not once this year have had to worry about the game being filmed, the water bottles being filled, or the clock being run at practice. She does whatever she’s asked to do without hesitation and has made it much easier for us coaches to focus our attention on basketball. In addition to playing basketball for 3 years and manager her senior year, Madison has also played 2 years of varsity tennis and 2 years of varsity softball. She’s also a member of the Spanish National Honors Society and the Multicultural Fair Committee. She has a 3.801 GPA and will be headed to UW-Oshkosh next year to study Elementary Education. Madison, we will miss you dearly next year but wish you nothing but the best going forward and I know with your kind heart you will undoubtedly flourish as an educator some day. Thanks for all you have done. 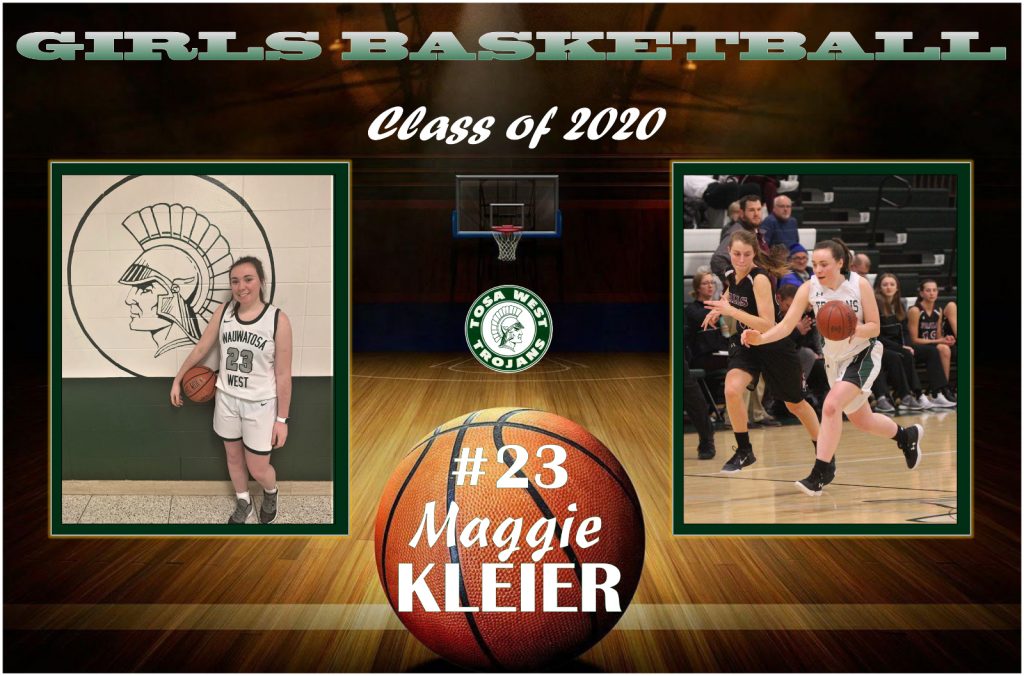 Maggie Kleier – Much like Madison, Maggie is someone that is very soft spoken and quiet. Last year as a junior, she came of the bench most of the time and showed great improvement over the year and got more and more opportunities to play as the season progressed. She ended winning the Most Improved Player of the year award as voted on by her teammates and coaches. As coaches, we were certainly looking forward to her being a big part of our team her senior year. Unfortunately, during the summer she suffered and ACL tear that has derailed most of her senior year. To Maggies credit though, she has fought her way back to where she is now able to play for a couple of minutes per game. Even though she hasn’t been able to play or practice most of the season, she has been at practice each and every day watching and learning so she could be ready at the end of the season to get back in there. This shows the character that she has. This character will help her as she goes forward to play basketball for Marian University next season. While I know that her senior year did not go exactly as planned, I am excited to see follow her and see what she’s able to do at Marian next year. With her work ethic and determination I have no doubt that she will be great. Maggie has a 3.532 GPA and will be studying Nursing at Marian. In addition to basketball, she’s a 3 year varsity softball player and a member of the Spanish National honors society. Maggie, I’m sure I’m not the only one who thinks what could have been when it comes to your senior year, but I wish nothing but the best for you going forward and thank you for being the great person and teammate that you are. 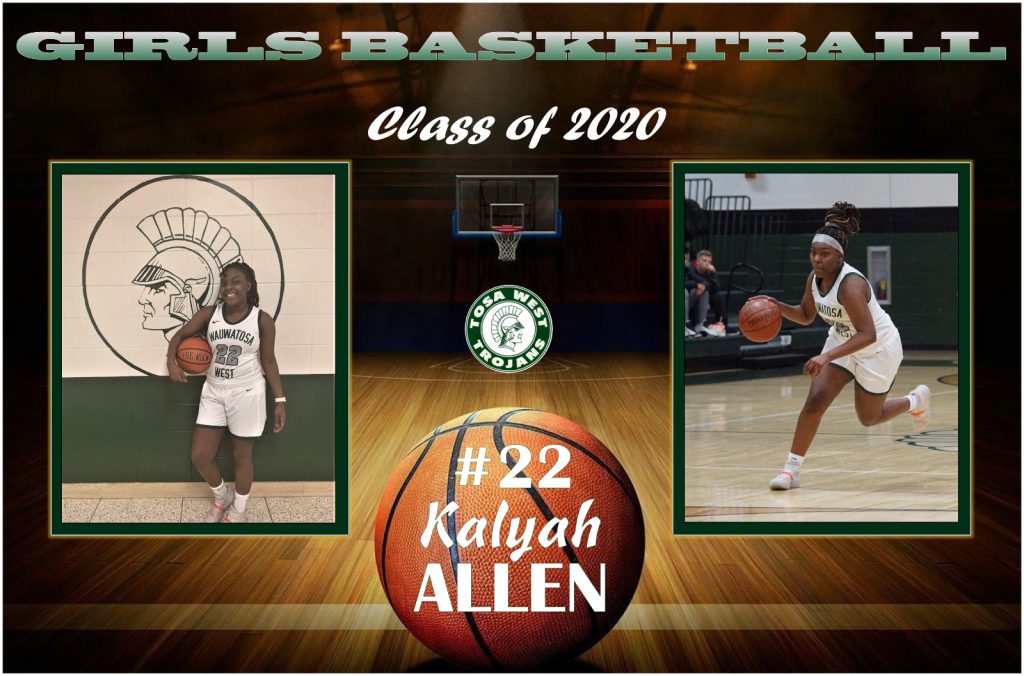 Kalyah Allen – We’re going to shift gears a little bit here with Kalyah. While Maggie and Madison are both soft spoken, Kalyah is not. When Kalyah has an opinion on something, you’re usually going to hear it. As a coach, it’s one of those things where you want to say “alright, knock it off” but then turn around and chuckle. She has a great personality and is an awesome person to have on the team. When I started coaching here 3 years ago, Kalyah was a sophomore and it was her first year on Varsity. I can’t say our journey together hasn’t had any bumps in the road, but I’m extremely proud of the player and leader that she has become over the last 3 years. Unfortunately, I know have to give the same speech I did for Maggie, which is that her senior year did not go as planned. Between two separate ankle injuries and an illness, she has had a hard time staying on the court this year. A few weeks ago, we feared that she would miss the remainder of the season. Luckily, what was thought to be a season ending injury turned out to be an extra bone in her foot. On Monday she was able to get out of the boot and was able to practice on Wednesday and Thursday this week to make it back onto the court for senior night which couldn’t make me happier. Kalyah plans on attending UW-Green Bay next year to study nursing or Social Work. In addition to a 3 year varsity basketball player, she is a 4 year varsity track athlete and a member of the black student union. Kalyah, thank you for being who you are and I can guarantee this team will not be the same without you next year.