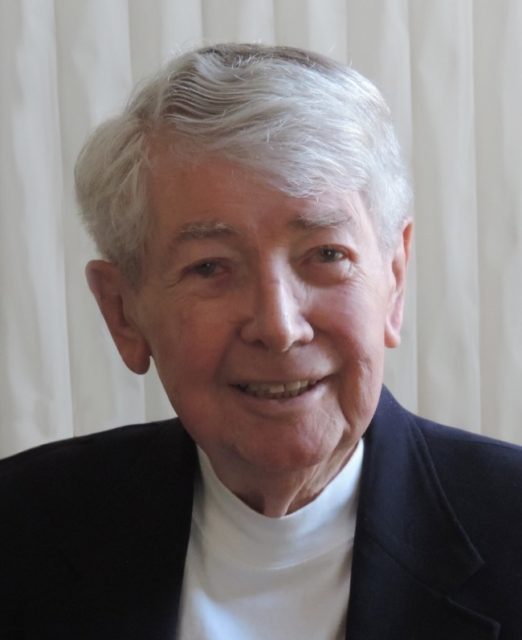 It is with a heavy heart that we inform you of the passing of our Beloved Former Teacher, Coach, Athletic Director  and Athletic Hall of Fame Recipient, Tom Janssen.

Thomas R. Janssen, born 7/17/1927 in Green Bay, WI, entered into eternal peace on 7/16/2020, the day before his 93rd birthday in Goodyear, AZ. He is survived by his beloved wife and best friend, Margaret “Peg” (nee Forbes) and his children, Thomas (Tara), Phoenix, AZ; Mark (Leila), Moreno Valley, CA; David (Anne), Wauwatosa, WI, and Linda Fischer (Jim) Hubertus, WI. He is further survived by sisters Jean Chier, Berlin, WI and Mary Lynne (Mike) Le Roy, Sheboygan, WI; 8 grandchildren and 7 great-grandchildren and Peg’s siblings, all of whom loved him very much. He is also survived by his first wife, Cecelia (Guyette) Janssen.

Tom graduated from Central Catholic HS in Green Bay and immediately enlisted in the Navy. After his discharge, he enrolled at St. Norbert College and later transferred to the University of Wisconsin-Oshkosh. He was called back into the Navy during the Korean conflict and returned to Oshkosh to get his degree in Education. Folloring graduation, he taught for a short time at Bark River-Harris High School in MI before going to the Wauwatosa School district in WI where he worked for the remainder of his career. During this time, he also received his Master’s Degree in Educational Administration at the University of Wisconsin. Tom taught social studies, coached football and ultimately became District Athletic Director, a position he held until his retirement in 1979. He worked in sales for the Healy Company until his “Second Retirement” when he and Peg built a home in Goodyear, AZ and moved there in January, 2001.

Tom loved all sports but especially the Green Bay Packers (being a proud Packer “owner”), and the Wisconsin Badgers. When he and Peg moved to AZ, he joined a golf group, the Sandbaggers, and made good friends who remained steadfast to the end. He and Peg loved to travel, especially cruising, suring which times they made – and kept – many friends from all over the United States and as far away as Australia.

Tom was a gentleman and a gentle man. He laughed easily, loved to tell jokes and had a story for virtually any occasion. Those who knew him know he enjoyed his evening vodka. He was a devoted husband, father and friend. He was an excellent coach who maintained friendships with many of his former players. His passing leaves not only a hole in many lives, but also a legacy of kindness, fair play and wisdom.

Funeral services will be held at St. Thomas Aquinas Catholic Church in Avondale, AZ on Thursday, July23, at 10 am. If so desired, contributions in Tom’s name and memory can be made to St. Vincent de Paul or the Wauwatosa School District for a scholarship that has already been established in Tom’s name.

No Events This Week

Events are added by athletic staff.
View All Events