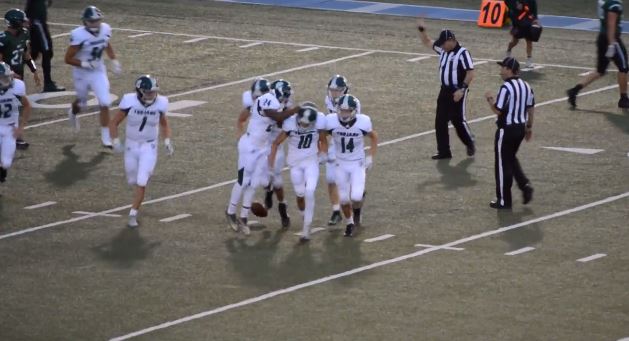 Wauwatosa West football recorded its first victory of the 2019 season against Nathan Hale High School on Friday night, September 6. An explosive rushing attack and strong defense produced the 27-12 victory for the Trojans.

Things got going pretty early for the Trojans when Cornerback Will Cape picked off Hale quarterback Bryce Niebuhr deep in Huskie territory. The Trojan offense had a short field and capitalize when quarterback Avery Dixon rolled right and hit senior wide receiver Cam Ruddock for a 14 yard touchdown. Ethan Peplinski capped it off with an extra-point, giving the Trojans a 7-0 lead early in the game.

With 3 minutes remaining in the half, the Trojan defense made another huge play to build the lead. Niebuhr threw a deep pass down the middle of the field that was intercepted by senior defensive back and team captain Trevor Kuhl for the Trojans. Kuhl brought the interception all the way back 47 yards for a touchdown. The Trojans went into the half up 14-0.

The Trojan offense got it going in the second half, capitalizing on the opening drive. The opening kick was squibbed but recover by Tosa West at the 50 yard line. A few plays later, quarterback Avery Dixon took an option keeper 46 yards to paydirt. The kick failed and the Trojans led 20-0.

On the ensuing drive, the Huskie offense faced a 4th and 2 at their own 43 yard line. Niebuhr handed off to running back Tobey Sayeg who looked like he was going to get the first down, but safety Logan Ertl made a big tackle in the backfield stopping the Huskies and giving the Trojan offense the ball in Husky territory. The Trojan run game nickled and dimed its way down the field until sophomore running back Alijah-Maher Parr scored on a 1 yard run off tackle. The Trojans took the lead 27-0 going into the 4th quarter.

The Huskies gained a little momentum midway into the 4th quarter when they recovered a fumble by Maher-Parr on the 10 yard line of the Trojans. Niebuhr completed a touchdown pass to tight end Ryan Accetta 4 plays later to get the Huskies on the board. The kick was blocked making the score 27-6. Niebuhr hit Accetta one more time about 4 minutes later on a deep pass over the middle. The 2 point attempt failed putting the score at 27-12 Trojans. Grady Lakatos recovered the onside kick for the Trojans, ending the game.

“Win feels good, but we’ve got a lot of things to clean up. You can see by the score by quarter where and when we went wrong and hurt ourselves. That will be our focus going into next week,” said Coach Andy Kolstad.

Avery Dixon finished the night with 154 yards rushing on 23 carries. The Trojan defense held the Huskies to just 10 yards rushing. Defensive Back Trevor Kuhl led all defenders with 5 tackles, a pass defended, and an interception.

The Trojans play Marquette next Friday, September 13 at 7pm at Trojan Field.